Mao Sidibé – Get down on it / Woma Woma (Senegal) 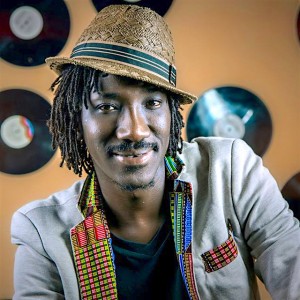 Senegal’s allrounder Mao Sidibé comes up with a dancehall remake in Wolof of Kool & The Gang‘s disco classic ‘Get Down On It’ featuring Papino.

Mao Sidibé – Get down on it feat. Papino

Mao Sidibé has been around. His journey took him from the Médina quartier in Dakar where he grew up and started the dancehall crew „BBC Sound System“ to France, where he would relocate to live in Paris for a couple of years. After opening up shows for french pop act: Louise Attaque at locations like Zénith (Paris) he founded an afro-folk-rock band called Ben’Bop together with the violin player of Louise Attaque Arnaud Samuel, Kadou of BBC Soundsystem and Vincent Stora. In 2009 they released their same titled album featuring songs like ‘enfant soldat’, ‘sans papier’ and ‘Punk is born in Senegal’.

2012 Mao Sidibé moved back to Dakar where he opened his own music and video production company Mao Production. Just a year later Senegals leading hiphop website http://www.rapdjolof.com/ named him the producer of the year 2013. Then in 2014 he get voted the hiphop video producer of the year and shoots the video to Senegals version of Pharrell Williams worldwide anthem ‘Happy’.

Check out the video to his song ‘Woma Woma’. It tells the story of a boy who is waking up by an SMS from his mother who sent birthday greetings to him. Other than that, none of his friends or workmates seem to care it is his anniversary. When he witnesses how his girlfriend receives a gift-pack from a friend of him during lunch break, he returns back to work visibly frustrated. Back home he gets compensated for the lousy day so far. All his friends have shown up and organized a surprise party at his place and the package his girlfriend received from his friend during lunch break, turns out to be his personal birthday present.