We spoke to Nneka: She presents her ‘top five’ from Lagos/Nigeria 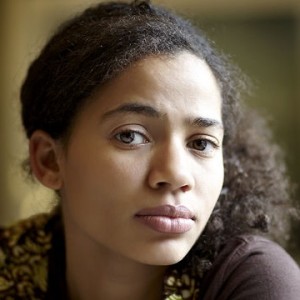 Nigerian based singer Nneka takes us right to the streets of Lagos. Into the urban jungle of Ajegunle, Lagos biggest Ghetto, where upcoming dancehall star Orishe Femi is from. She tells us about the lyrically skilled Wande Coal. We get to know more about her passion for political messages and her friend Nigerian Afrobeat musician Seun Kuti aswell as the masked and humbled Lagbaja. Last but not least she introduces us to Seyi Shay, an english female singer with Nigerian roots that also found home in Lagos today.

Nneka: „Orishe Femi‘s song ‘Double Wahala’ talks about overcoming your enemies and being bigger than your enemies and not showing your week side. „I’ll be owner of dem body“ … It’s his biggest song.“

Nneka: „I like the song that Seyi Shay did with Wizkid. Its called ‘Crazy’. It’s not typical blingbling, Nigerians trying to be american and its very arty. You should go check it out. Wizkid is very talented. He can really sing. Its not only autotune like many other Nigerian artists. And Seyi Shay is amazing. She even won an Grammy award when she wrote for Brandy back than. I worked with her when I was part of the jury of Nigerian idols. She came to perform and promote her album.“

Nneka: „I really like Lágbájá for the fact he is covering his face, which means that he must be a very humble guy. Lágbájá is a Yoruba word that means ‘nobody in particular’. He speaks for the people and always represents Africa in a very positive way. When he is using strings, you think you’ll see a bunch of white people playing strings. But in the video it turns out that all his string players are black, with their traditional attire and yoruba cloths, thats just so amazing. In the middle of some village or some rual or ghetto area in Lagos you just see a bunch of people sitting down and playing their violine. Its very abstract but I love those type of pictures Lágbájá is able to put into his music.“

Nneka: „I like the song, it attracted me because of the vibes, the groove and its text. Compared to many other artists Wande Coal puts his words together very intelligently, I like that.“

Nneka: „Obviously I like what Seun Kuti is doing. On his latest album he has a song with M-1 from Dead Prez. It is about corruption and political lies. Seun is considering these leaders as vampires, coming to power just to suck your blood. I like that M-1 and Seun joined forces, because M-1 is hiphop and Seun is also being a hiphop head that is doing Afrobeat. I also did a song with Seun on that record. It’s calles ‘Black women’ you should check it out.“