Nobody controls the airways in Abidjan like he does. Bebi Philip is the champion of contemporary coupé-décalé. This multi talented producer learned from Freddy Assogbah, playing guitar and piano in his band Group Akwaba, later the arrangeur and composer N’Guessan Amessan a.k.a. Bebi Philip also started producing his own songs. 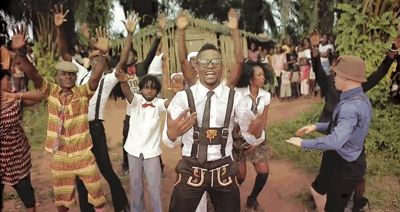 His latest being the so popular balaumba dance. In the video he hosts a dance competition under palm trees. The dancers show up dressed in everything between european suits and african cloths. Bebi Philip tops it all when he appears as his own sidekick-rapper dessed up in Bavarian „Lederhosen“. Babi, that’s what’s up!