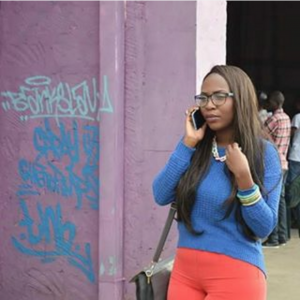 Kenyan Afro-Soul diva Dela Maranga is currently riding high on her Swahili cover of Adele‘s song ‘Hello’. Polycarp Otieno of Sauti Sol fame translated the song into Swahili and accompanies her on his acoustic guitar.

Just like Kenya’s indie band Sauti Sol or the experimental electro trio Just a Band, Dela put out her debut album ‘Paukwa’ on Penya Records in 2009. The NGO-Label has worked with many upcoming bands from Nairobi’s eclectic music scene. ‘Paukwa’ marks the beginning of Dela‘s music-career. In Swahili culture kids would sit around the fire and listen to stories at the end of the day. The first words that indicate the beginning of a such story are „Paukwa pakawa, Sahani ya mchele, Giza ya mwizi“, meaning plate of rice, darkness for the thief and so on, just words to tweak the interest of the audience.

In 2009 Dela took part in a musical ‘Mofaya’ that portraits the oppression, injustice and violence (corruption, leadership, land-grabbing) that blew up in Kenya during the time of the elections 2007. It is the first Kenyan musical that made it to New York, to the Musical Theatre Festival.
Kenyan singer Eric Wainaina wrote the musical and also plays the main character: Luanda Magere, a hero of the Luo community, who processed super powers and whose flesh was made out of stone. In the Luo mythology he was of great defeating the Luo’s number one enemy, the Lang’o’s. To fight him, they brought him one of the most beautiful woman to marry. One day, he fell sick and his first wife was not around to take care of him, so Luanda called his Lang’o women to bring him his medicine. He told her to cut his shadow with a knife to apply the medicine. When she was doing it, she saw that his shadow was bleeding. Later that night she went back to report it to her people. The next day the Lang’o’s started a surprise attack and Luanda could eventually get killed when one warrior hit his shadow with a spear. Luanda fell down and his body turned into a stone. There are plenty of myths around this stone which can be visited up until today at the Sidho village in Muhoroni, Kisumu county.

In Eric‘s play Luanda is a radio DJ of a fictionally slum radio station in Nairobi. Dela plays his co-host Wangare. During the post election violence, the radio was the only way, people could get new information about what was going on. People were calling in to air their grievances of the need of food, sanitation, education and jobs. On air they could talk directly to ministers and tell them what was going on in the slums. They became the voice of the people. As the violence continues, Luanda get caught up in it and eventually dies. Wangare carries on the torch and shows that he didn’t die for no reason.

Recently Dela put out few singles to announce her upcoming album. The latest being ‘Mafeelings’ composed by Bien-Aime Baraza of Sauti Sol, Robert ‘R-Kay‘ Kamanzi and herself. It talks about true friendships and expresses feelings of being cheated. It fuses melodies of Taarab from Kenya’s coast with the current vibe of Afrobeats from Nigeria and her soulful voice.