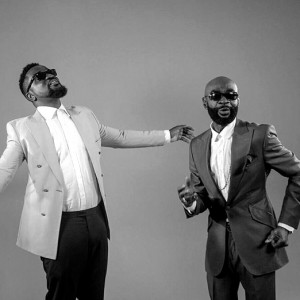 Hiplife star meets Highlife legend. Rapper Sarkodie teams up with Pat Thomas for a beautiful wedding song. ‘Bra’ is taken from Sarkodie‘s forth album „Mary“. It is an acoustic album that he dedicated to and named after his grandmother. It puts his image as a hardcore rapper, who addresses problems in Ghana behind (read on: http://urbanafricaclub.com/sarkodie-the-masses-ghana) and show more his soft side, as an African family man. In the video Pat Thomas acts a father who accompanies his daughter down to the altar to become Sarkodie‘s wife. ♥♥♥

Pat Thomas is known for Burger Highlife, a genre he made popular in the 80s, while he was living in german Exil in Hamburg, hence the name. His international album ‘Pat Thomas & The Kwashibu Allstars’ was recorded in Accra by Ghanaian multi-instrumentalist Kwame Yeboah who plays live with international acts like Craig David or Patrice. He took his time and got the living highlife legends Ebo Taylor, Afrobeat mastermind Tony Allen, Osai Tutu, Ralph Karikari and German sax player and producer Ben Wolf all in his home studio together to record with Pat Thomas. The album is phenomenal and appears in many best lists of 2015. Their current success as a live band going on tour in Europe, can be almost compared to the late international career of the Cuban Buena Vista Social Club. One of the albums you definitely shouldn’t miss out!