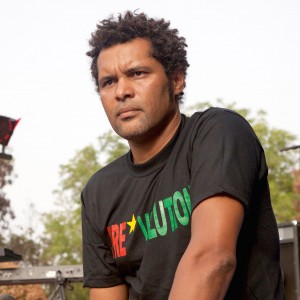 Serge Bambara alias Smockey is an activist, hiphop pioneer and spokesperson of „Le Balai Citoyen“ a youth movement for a better Burkina Faso. He had to go underground because the situation has became dangerous for activists in his country. Military forces have even attacked his studio. We met up with Smockey short before the election announced to take place in Burkina Faso 29 of November.

Smockey: „Didier Awadi composed the song and we recorded it in my Studio Abazon in Burkina Faso. It’s all about tolerance. We are talking about the extremists in Africa, like Boko Haram and all that stupid people who think they can rule the world with their own rules. So this is a song against terrorism. It brings together a lot of different artist and many influences, female and male artists, the list is long … Adé Bantu, Alif Naaba, Didier Awadi, Josey Priscille, Mareshal Zongo, Master Soumy, Monza, Phéno Bi, Sissao, Soum Bill, Zeynab Abib. So it’s nice to have so many artists to speak out against terror. A lot of people don’t have the courage to talk about it. They are scared to be bombed and chased by the terrorists. But we must have the courage because this is not admissible. It can’t be possible in our world, that people are selling us terror, telling us that it is resistance. This has nothing to do with resistance, this is terrorism! And the opposite of what the people in Burkina Faso were fighting for when they made their revolution and chased the dictator out of town. Those terrorists are killing innocent, we have to fight this, this is important.”

“I have worked with Didier Awadi before. I did a song with him about Thomas Sankara, it is called ‘A qui profite le crime’. Every crime has got someone who profits. So e are asking a simple question: Who took the profit of murdering Thomas Sankara? Awadi and me are huge fans of Thomas Sankara. So after this song we did another song called ‘La patrie ou la mort’ and this is a tribute to him. He was and still is a hero for us and a reference because he has been dedicated his life for this country and for the hopes of the youth. So whenever Awadi and have the chance to come together and team up, it’s always a good cocktail.”

Smockey: „My comrade Sams’K le Jah, said that this president has to go and he will go, there’s no negotiation about it: ‘Il faut qu’il parte, et il partira’. He recorded the song a year before the revolution. We sung it on concerts before the cassette was released and people joined in. It needed no promotion, because the chorus is very simple to remember. He lost his job because of this song and they burned his car even before, when he was still an animator at Ouaga FM. Because sometimes he was playing this song and the director of the radio said, he doesn’t want any problems so he got fired about it. This song is important because a lot of people knew this song in the process of revolution. Everybody knew it and everybody was signing along.“

Smockey: „’Votez pour moi’ was a special song I recorded for the elections in 2005. The chorus is like nursery rhyme so people thought this is very inoffensive. They put it on TV every time because they even thought it is a tribute to democracy go and vote for Blaise Compaoré. Some people of Blaise Compaoré thought it is commercial promoting their party. They didn’t even listen to the lyrics. So my song fucked up the 4th republic, because after they started to promote the song on TV, they started to realize: „shit, we made a mistake, this guy is talking about us and our bad things, you know.“ So because this song was like a joke, it still amazes me that people thought this is serious. It shows once more, that people in power don’t take us rappers serious and that they are not listen to our lyrics. I even won a big prize of burkina faso artists with that, the kundé d’or. That was the time when they started to understand, so the first lady said, she doesn’t like the song and she didn’t want me to win, she was preferring another guy and stuff like that, she doesn’t like hiphop because she started to understand, what the song is talking about. But anyway the song was a big success.“

Smockey: „The first song of Faso Kombat got released on a compilation called „La part des Ténèbres“ from my label studio Abazon. And this song was the starting for the group Faso Kombat. So you see all the emerging of the group and they were already engaged. It was talking about the students: ‘Diplômé paumé’ when you got a diploma, but you can’t find a job, because the system is blocked only the sons of the rich people can get access to university, can have scholarships and stuff like that. So it was talking about the situation in Burkina Faso. We have a lot of talented students in Burkina Faso, but they can’t find a job, they can’t get a place in the university, that’s what the song is talking about. It’s a young generation that is lost. The politicians don’t care about them. So they had to get used to do basic jobs and not what they have been studying for. So you had few choices in order to become somebody in our country. Either you would have to get a membership card of the majority party or you were among the few lucky ones who got a scholarship. So this song was telling to everybody how burkina Faso works. That’s why it is a great song.“

Smockey: „Am a big fan of Biri Lingani. He is musician from Garango my hometown where my father comes from. He is a Bissa his style of music is called Biri. Whenever he shows up, he immediately gets the attention from everybody. Even without having started to play, only through his presence. He is very small, has no teeth but everybody knows that basically anything can happen. If you could tell him in a studio how to play to a song he would become the biggest star. But he doesn’t work that way. When he grabs his instrument he plays what ever he wants.“