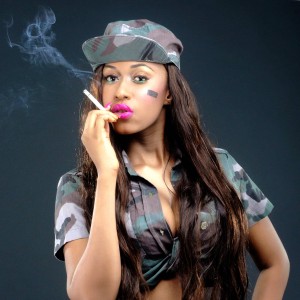 Cynthia Morgan has a gun tattoo on her body and acts the ‘bad gal’ in Nigerian dancehall. When her song ‘Popori‘ was getting banned on TV in Nigeria and she was sued by an artist named Queen Ure for using a word, sounding similar to the title of her album ‘Porpori‘, she was getting seriously angry: „I didn’t steal your dead ass song nor did I stole your word. My dog sings better than you do. Stay outta my lane or I will f#*king punch you with a fist full of rings.“ Later the two singers have agreed to arrange their dispute outside of law.

Cynthia Morgan gets frequently asked about using fake Jamaican Patois accent when she sings. The singer has never been to Jamaica, that is why people should stop wondering why she pronounces Patois her own way: „Everybody who says it’s not 100% real, you are not the one who are paying me for shows now!“

Cynthia Morgan is currently working on her new album, which shall be released later this year. And it’s ture there is request for a dancehall singer, Jamaican style in Nigeria. That is why she has so many collaborations in the pipe, reaching from Nigerian artists such as Bracket, Iyanya, Orishe Femi, Ice Prince, Phyno, to the Ugandan dancehall scene with Radio & Weasel.

For a long time people were speculating what Cynthia Morgan meant with ‘German Juice‘, the title of one of her biggest songs so far. In an interview she stated, that she was inspired by girls from Western Uganda and their big booties. And that it actually implies bodily fluids.