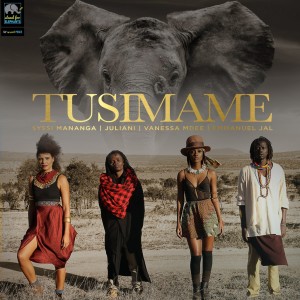 After Satao one of Kenya’s most famous elephants was found dead, killed by ivory traders, 4 artists from 4 african countries team up to #StandForElephants.

Kenyan Rapper Juliani from the Slums of Nairobi, Sudanese rapper and former child soldier Emmanuel Jal, songstress Vanessa Mdee from Tanzania and singer Syssi Mananga from Congo-Brazzaville. Together they #StandForElephants (Tuwasimamie tembo). The number of elephant population in Africa has declined dramatically. Down to one third in the last 40 years. At this rate, elephants may become extinct in our lifetime.

The song ‘Tusimame’ shall inspire communities to engage in positive action to protect the endangered animals. Rapper Juliani is known for his clever and socio-critical lyrics. His verse is the last on the track: „Do you know Grandis the most elegant elephants, Amboseli they are saying he will not make it, to old age, The elephant his tusk on the neck, like Ornaments Big guns stop the big hearts. Where is the government? Tourist don’t come to see dead elephants“.