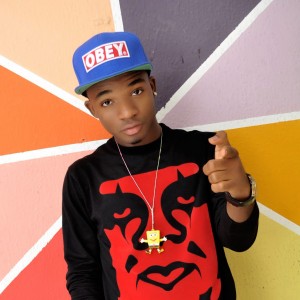 2015 is Wizkid‘s year.The rapper that just turned 25 renewed his contract being an ambassador of Pepsi and with Drake and Skepta he has the biggest international collabo going in Nigeria these days, on a song that already is an anthem on the streets of Lagos.

His song Ojuelegba is named after the district in Surulere in Lagos. With melancholic synth in minor the song won the heart of the population in Nigeria. Just like back in the days, when the musically talented Danfo Drivers where discovered. Two driver of the public mini-busses that were singing during their work and had a major success with their song ‘I am a Danfo Driver’ (http://bit.ly/1KGNqd9) about their daily work on the streets of Lagos. Wizkid remembers in his song Ojuelegba the time he had to take these busses to town. That’s why he decided to jump into one of the yellow mini-busses to shoot the video to the song:

„Sitting in this bus shooting my video thinking about when I used to move around in the bus like this praying for a better life! I’m thankful to God and my fans! Big things coming 2015!!“

In the meantime no other than British Grime rapper Skepta played the song to Canadian R’n’B wonder boy and rapper Drake during a festival in the UK. Blown away of the talented Lagos singer they both decided to jump on a remix version of the song. Skepta remembers in the song how his teachers would struggle to pronounce his Nigerian family name Adenuga:

„When I was in school, being African was a diss. Sounds like you need help saying my surname, Miss. … Saying, “Skeppy come home, baby come home!”; Yeah, I love the sun but I respect the rain; Look forward to good times, can’t forget the pain; I was the kid in school with the 10 Pound shoes White socks, jack-ups and the pepper grains; Said they’re gonna respect me for my ambition; rest in peace my niggas that are missing; I had to tell my story, cause they’d rather show you, black kids with flies on their faces on the television.“