Octopizzo – Something for you (Kenya) 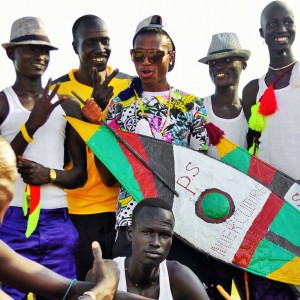 Octopizzo is on top of iTunes in Kenya. Coming from the slums of Kibera, he is the first Kenyan artist to be No.1 of the album charts of his country, leaving behind international superstars such as Beyoncé or Dr Dre.

His album ‘LDPC – Long distance paper chaser‘ is celebrating long-distance runners from Kenya: “They are the real heroes, the ones who win real gold medals and still keep it real other than Kenyan rappers, who tend to show off. Still young guys don’t know about them and they barely get any attention from the Kenyan press.” In his song ‘Prezidential‘ Octopizzo appoints them the real presidents of Kenya, as they are holding the countries flag up high. His song ‘Could be us‘ is love song about a girl that didn’t want to hang with Octopizzo earlier. Now that he’s a star and not a ghetto boy anymore, she wants so be with him. When he replies, telling her ‘This could be us’ she starts to cry. In ‘Wwy‘ = ‘Where were you’ Octopizzo talks to all the fake friends who only care about you when they see you are successful. He ask them where were you when I still was working in a Garage in Kibera? ‘Next2you‘ is a song about drug abuse. Especially in places like Kibera there’s even young people getting addicted early as you can high on illicit brew for only 10-20 Shillings. One of the most important songs to Octopizzo is his song ‘All black everything‘ he dedicates to all legends from B.I.G. to Mother Theresa to all the unknown souls that have died because of genocide and terror.

„In ‘All black everything‘ I’m lyrically dressed in black to bury the dead people and all the ill stuff of society like corruption, war, terrorism. People are suffering because one guy won’t get out of power. Somali friends of mine are getting arrested just because they are from Somalia. That’s why I am extensively working with refugees. Sometimes I just had to cry after the workshops, because the UN can’t heal those kids. People saw how women were getting raped others got cut off their head. When I invite them to rap with me they sing how they want to revenge. They let all the anger out. Music is like a therapy to them. I want to shot a video to the song in a refugee camp like Dadab or Kukuma. Let’s do something, let’s change. “ 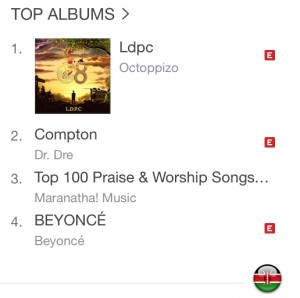 Besides LDPC, Octopizzo also works on a more acoustic project where he wants to big up all the early heroes of Kenyan pop music: „People can name the players of Manchester or Arsenal, but they can’t tell you who the fathers of Kenyan music are, of niyatiti music, Luo benga music or Luya songs.” ‘Something for you’ is one of the songs that captures the vibe and a contribution to the debate in his country on a lack of originality in contemporary Kenyan pop music. Octopizzo recorded the song together with one of his neighbours in Nairobi Blinky Bill from the group ‘Just A Band‘. Together they sampled a song by Slim Ali and the Hodi Boys: ‘You can do it‘. In the 70s it was huge in Kenya selling more than 40,000 copies.

Slim Ali and the Hodi Boys – ‘You can do it’

In ‘Something for you’ Octopizzo tells an urban-village love story. A young man from Nairobi falls in love with a girl from the village. After their marriage he introduces her to the city life: “Me ni Oscar, na we ni Lupita / so ni obvious utanifuata, nikipita”. ( I’m the Oscar and you are Lupita. So its obvious that you’ll come and follow me). The video was shot by German director Daniel Obradovic at Olympic Primary School in Kibera and brings Octopizzo back to where he grew up: Kibera. In the video you can also see german rappers like Meackes or Marteria with whom he was hanging when they met to record a song for Viva con Aqua, to be released later this year.

Octopizzo – ‘Something for you’

buy it on iTunes: http://apple.co/1TqVtiW