Wanlov with his top5 from Ghana 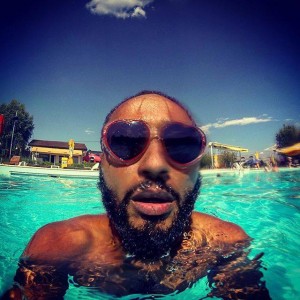 Wanlov is a musician, video-director and one of the most influential afropolitan intellectuals in Ghana. After living in the US in the 2000s, he moved back to Accra where he lives since almost 8 years now. Abroad he is popularly known for his hilarious rap-duo Fokn Bois, who are about to shoot their 3rd episode to their rapped musicals’Coz of Moni‘ (Watch the entire 1st episode: http://bit.ly/1TAxiyx). Most people in Ghana know Wanlov rather for his controversies, challenging public opinion with songs like „Jesus is coming“, „real-gay music“ or „sexing islamic girls“ and of course showing his private part on public TV in Ghana.

We had the chance to catch up with Wanlov when he was in Europe this summer and he took the time to introduce us to some of his favorite music clips from Ghana. First he introduced us to a video he realized for Unicef to spread awareness of ebola and cholera featuring a whole bunch of Ghanaian urban artists. He tells us about a young rapper called Efo Chameleone, whom he met when he was a judge at a talent show called ‘Big in Ghana’. The 3rd video is a song by the Azonto king: Gasmilla. We also get to know more about the collabo of Sarkodie, Ghana’s biggest star with Red Red, the project of his partner from the Fokn Bois: M3nsa and why his Gopro broke shooting the video. Last but not least Wanlov tells us about his passion of ‘Gargantuan Bodies’ and the same titled song by Hiplife trio 5five.

Wanlov: „Wash wana hands“ starts with my sister ‘Sister Deborah‘ announcing the song. The project was to make people aware of ebola and so of washing their hands. Even though it hasn’t spread to Ghana, cholera is there, which spreads almost the same way as ebola. I’m singing the chorus. And then we have the artist we feature Gasmilla, Yaa Pono, Wyalla, Sheriff Agono, Steve O, Eibe Edem. And the reason I chose them was we wanted to reach a wider audience. Each of them speaks a different language of the major languages in Ghana. Gasmilla speaks Ga, Eigbe Edem speaks Ewe, Yaa Pono speaks Twi, Sheriff Agono speaks Hausa and Dagbani, and then Wiyalla speaks Sisalla and Wale and then Steve Oh speaks Frafra. And I speak Pidgin. It’s just funny ways to get young people to wash their hands on a danceable beat.”

Wanlov: “I did this competition called eco rave where artists wrote songs about the environment and he won that competition out of 5 artists. That is how this video came about: „Keep Ghana clean“. I shot that video for him after his song won. We went to his town where he lives called Bawjiase. And its sad, this is a far off, out of the city, in the back of a town, somewhere far out and its full of plastic waste. So it’s like even if you go far north, anywhere in Ghana right now, you can’t escape plastic and it’s sad, that the government, keep songs like this under the radar. Cause these songs if they would play it, they will collect a 1000 Dollars per month to play it on TV, but this is a public service announcement so that’s what really eggs me about Ghana. And now people are dying because of the pollution. Recently there was this flood in Ghana and an explosion at circle in Accra and 300 people died. right now this guy is gonna blow up really huge if he gets the right spotlight in Ghana.”

Wanlov: “Efo Chameleone uses a lot of onomatopoeia when he raps. He uses these sounds when he raps, like when you eat rice so fast, or kenke, it can sit in your chest and block and you can’t swallow, so he can be rapping and just „eeeeh the rap is choking me“ and then continues to rap and all these things… Sometimes he pretends that he’s getting hick-ups. And he does all these sounds and drama in his raps. And he raps also in the Ewe accent which is funny as a lot of Ashanti and other people from other tribes always make fun about how Ewe people talk. So he has actually made an effort to sound as Ewe as possible rapping Twi which is also very funny. The beat is from Missy Elliot – Get your freak on. I shot the whole video on a Gopro also in Accra around the area of Sodom and Gomorrah where they start to evacuate people now. They say it’s because of the pollution and the flooding but we think it’s for real estate development. We know it better. They always thinking only about their betterment.”

Wanlov: „I like Gasmilla for his funny videos. One of his really funny songs is ‘Boosha’. There is a part that is crazy. It is the part where the guy his girlfriend leaves, to go out to town and then he brings another girl in the house. But his girlfriend will come back unexpectedly. So when he comes outside to meet her, he comes with a huge bed sheet. So when she comes he just covers her and hugs her. So she’s struggling to get out of it and then the other girl exits the house and runs away. So by the time she comes out of the bed sheet she is just like why did you do that. And he says: ‘He just felt like doing that’. Gasmilla brings these kind of ghetto tricks to educate you. And the chorus ‘Boosha’ simple asks: ‘who was the one that passed gas in the morning. It was you, who farted!’ Cause a lot of guys in the ghetto are staying in one room. So somebody wakes up and says: ‘Hmmm. who farted this morning’. That’s what the chorus is about. He always plays roles in his videos, very comical. It’s one of my favorite videos and he reminds me a bit of Busta Rhymes. How Busta Rhymes videos where animated and energetic. And also in Ghana we like these fun accents and he does this northerner accent. In his first verse of his song, he raps like people from the north of Ghana would speak Twi or Ga. And thats also very funny.”

Wanlov: „Sarkodie wanted to do a song with M3nsa. And I think M3nsa sent him a beat. And then he rapped this ghetto thing on it and then M3nsa also rapped his verse. And then for some reason the song didn’t make it on his album. So when M3nsa and Elo from Hungarian dancehall crew Irie Mafia started working on their new duo called Red Red, they changed the beat. The video has a very good feeling and very professional camera work,very smooth. There was this fat guy who does a somersault in the video at some point and he broke my Gopro camera, cause I was taking all the low shots. I was filming from the ground up so he does the somersault and his legs hit my camera and the camera spins and breaks. You can also see Pappy Kojo and Joey B they just sitting on stage, angry because they came late to the video shoot and M3nsa was like no we can’t film you anymore. They filmed how they showed up and so am also in their as an EGC guy (Electricity Company of Ghana) who cuts up the electricity when the dancing is getting fun. And that’s the main thing about this video. It’s the way the kids are dancing, the energy is so good.”

Wanlov: „5Five from Adabraka. I really like these guys cause they do good dance music. They had like the 2nd or 3rd most popular Azonto song. And with this video, everybody knows me in Ghana, like my favorite thing, is girls with big botos. And this video has girls with big botos. Nowadays you see videos people say girls have big botos. And when you watch them you see slim slim girls. This is what we are talking about, we are talking about gargantuan bodies. So these guys represent that very well. And this video was banned and they didn’t play it on any TV station. Its not very controversial, in the lyrics. They are just saying the girl has a big body let me take her measurements. You see him with the tailer tip and its not vulgar. I guess it’s just too much ass for TV. I really enjoy the song and the video. It’s black and white. And the girls are just shaking it they just giving me a good vibe. I like it. Botos good rap good beat. Papi and Killy are really good rappers with wordplay delivery style and so on. The other guy Gyino has a strong energy. Every time when I’m at these house parties, where they dj from youtube. This is one of the songs they play over and over again.”