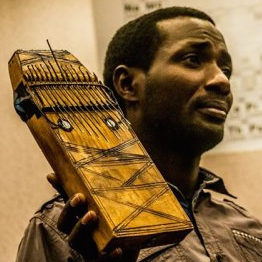 After a failed coup attempt in Burundi in May 2015 the country fell into crisis, 100.000 have left the country. Now Burundian musician and bass player Steven Sogo composed a song, a cry for „Democracy“ for his country. We had a chance to catch up with him during his stay in the US:

„Actually all professional Burundian musicians fled towards neighbors countries like Rwanda, Uganda, Tanzania and Kenya, some because they can’t make a living due to actual unrest and others due to persecution because they sang against the third term or refuse to support the government… My song ‘Democracy’ really encouraged people to stand up against the unconstitutional president third term but also my entire life went in danger, once my feet in Burundi.“

“We can’t accept to assist our Arusha agreements, our constitution, our freedom, our future, our hope being taken away by one or a small group, just for their own interest, not for the country. We have to keep on going, don’t give up, don’t give up.“