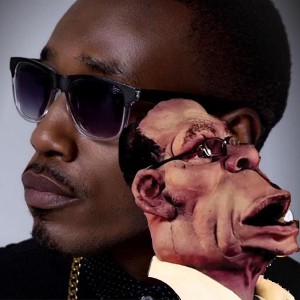 Kenyan political satire show flips Zambian hit-song “Ama-rulah” into “I am a ruler” with a drunken Robert Mugabe and other puppets of politicians explaining their addiction to power. The video shows Ugandan leader Yoweri Museveni (nickname M7) waking up Robert Mugabe, who has fallen asleep, at a meeting of an alcoholics “anonymous” support group: ‘Drunk in Power’, just like it apparently happened on a recent visit in Japan. Mugabe than tells the group his experiences in power over the instrumental of Zambian singer Roberto: “ … I came in the 80s, still ruling in my 90s … you can never take this presidency from me, You can’t touch me, cause I am a ruler … ”.

After Mugabe‘s verse, it is Museveni who tells his experiences holding on to power, since 30 years. The presidential elections had confirmed him in power in February 2016. Even though international observers proclaim the election results to be unfair, as opposition leader Kizza Besigye has several times been put under house-arrest and the freedom of speech has further been restricted, switching off social media channels during the elections.
The puppet of Rwanda’s president Paul Kagame keeps quite and seems to not want to talk to the group about his possible plans of staying in power.

Kagame’s Twitter account had recently answered a tweet by a Kenyan TV presenter directly, who was worried about him becoming another East African president might hold on to power (after what happened in Burundi and Uganda). His prompte reply led Kenyans on Twitter (KOT) to join the discussion and spoke their mind: #SomoneTellKagame.

@levikones worry more about your own legacy …if you got any at all to think about!!

The original version ‚Ama-Rulah’ is from Zambian Afro-R&B artist, producer and on-air presenter Robert Banda alias Roberto. He is a former songwriter for South African Kwaito and bubblegum heroes Boom Shaka and Thebe. He started to produce music at home in Lusaka. When his brother-in-law went to work, he broke into his room to work on his computer and lay down beats. In 2007 Roberto released his debut album. ‚#1712′ is album number four and named after his date of birth. The first song „Chitenge” talks about the importance of Zambian culture. While everybody is on Facebook nowadays, Roberto praises the values of remains a connection of traditional culture and Nyanja language.
‘Ama-Rulah’ is the biggest song to come out of Zambia in recent years. There are feature versions with Zambian Slap Dee  and Nigeria’s Patoranking. A dance-group based in Nairobi called Dru Dancemafia recorded a video where they show how to move along this dancefloor-killer from Zambia.