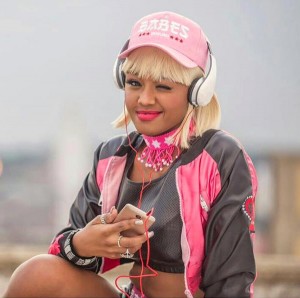 Babes Wodumo is riding high with Durbans electro-grooves gqom. She is the new superstar in South Africa topping the charts with her debut single ‘Wololo’.

Bongekile Simelane alias Babes Wodumo „famous Babes“, was well known for modeling and dancing in music videos for artists such as Durban’s finest kwaito posse Big Nuz. She first began to MC herself in 2015 in songs like „Tsege Tsege“ by Big Nuz. Mampintsha, the charismatic frontman signed her to his West Ink label and crowned her the „Gqom Queen“ with the release of her debut album „Gqom Queen vol.1“. Later it turns out the two got engaged. With shouts and chants in Zulu Mampintsha is a key part of her songs and features throughout the album. Other artists include DJ Tira and Sox, South African star rapper Cassper Nyovest and Nigerian superstar D’banj.

Gqom music, by the way is pronounced Gom with a click-sound between the „G“ and the „O“ and got exposed outside South Africa by an EP release of Durbans production trio Rudeboyz, on DJ Moleskins London based label Goon Club Allstars. Few months later the Italian digger Francesco Cucchi alias DJ Nan Kolé opened a platform for Gqom music with his label „Oh Gqom!“ releasing compilations with a selection of producers of the Durban underground scene with names like Citizen Boy, Mafia Boyz and Cruel Boyz exclusively available on Bandcamp for 2 Pounds each song and on limited vinyl edition. Locally most of the gqom „bedroom producers“ from the Townships around Durban, were putting there songs on compilations by renowned Durban Djs like DJ Tira, DJ Sox or DJ CNDO for a buyout-fee at beginning without being credited as composers.

Babes Wodumo became the local ambassador of gqom music in Durbans male dominated electro scene. Her sudden stardom caused many public debates: “People will judge me because I go to clubs and I’m a pastor’s child, but I always tell them that I saw their children at a club while I was performing.“ Her second single „Mercedes“ even got rejected from airplay on South African national radio SABC, as it is also used as a synonym for a synthetic drug, used by teenagers in the region of Kwazulu-Natal. While ‘Wololo’ translates into „Wohoo!“ and was meant to spread awareness  of the consequences of drug abuse: „ …the next day you won’t remember where you ended up sleeping, Wololo …!“