Big Nuz – Do you still Remember in memory of R. Mashesha (SA) 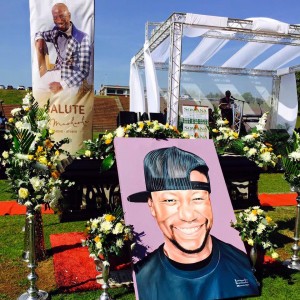 Kwaito lost one of the artists that helped to celebrate the genre’s comeback in 2009: Sibusiso Khomo, famously known as R Mashesha of the Durban based Big Nuz crew passed away on Friday 7th August 2015, only one day before the group released a new album entitled ‘#FTF‘ – ‘For the Fans’. His funeral takes place this Saturday 15. August at King Zwelithini Stadium in Durban, Umlazi where the group originates from. DJ Oskido just posted a video on instagram from the ceremony.

DJ Tira built the groups career under his record label Afrotainment. Here he talks live on SABC about R Mashesha‘s passing on:

From their new album: Big Nuz – Halleluyah in Memory of R. Mashesha

One Response to “Big Nuz – Do you still Remember in memory of R. Mashesha (SA)”